I had the privilege of teaching in Washington state for 8 days in March this year. I found out how to pronounce names like Skagitt and Whatcom. I enjoyed meeting some fascinating weavers. I also experienced the wonderful community of weavers in the Puget Sound area, and of course I saw some lovely scenery.

I didn’t know that the Skagit Valley is one of the top producers of flower bulbs in the world. The bulbs I order from Holland often originate in the Skagit Valley. While I was there the daffodils were in bloom.

My first teaching assignment was a lecture to the Whidbey Weavers Guild. During this time of emerging corona virus activity, the guild was well attended. My lecture on Overshot: Past and Present was a warm-up for the three-day workshop I would begin the following day.

We had an eager 15 attendees in the overshot workshop. The work was very creative. I send out instructions for preparing the looms ahead of time. In the workshop, everyone follows the same treadling order, but each weaver chooses their own colors to bring. Sometimes the thickness varies from one weaver to the next, also. The result is that everyone’s artistic decisions and sense of design are apparent. No two set of samples are identical. The students work through a certain set of treadling patterns and go home with a variety of samples. Some of their work is pictured below.

It was fun getting to know this weaving group. They are so supportive of each other and encouraging. I have never taught in an area where I needed to plan my presentation around the ferry schedule so that was a new experience. I said my good-byes at the end of the weekend class, knowing that I’d see some of them the next day.

The day after my overshot workshop, two wonderful ladies took me up to my next assignment: a lecture on Summer and Winter to the Skagit Valley Weavers Guild. Many of the guild members were also members of Whidbey Weavers Guild and of the Whatcom Weavers Guild, who would host me for my next workshop. A couple of my overshot workshop students brought in their samples. They had cut them from the loom and washed them the day before, after the overshot workshop was finished. It was fun to see their completed work and talk about what their next steps would be.

After my lecture I was driven to Lynden, Washington where I would give my last workshop of the trip on early American textiles.

The three-day Early American Textiles workshop was presented at the Jansen Art Center and hosted by the Whatcom Weavers Guild. Nine students wove round robin style on ten different looms. Each loom had been warped by one of the students in a traditional weaving pattern using thread similar to what early American weavers would have used. Throughout the workshop we stopped to talk about production practices within the US and Europe during the 17th, 18th and 19th centuries. One of the students brought in a lovely coverlet she had found in a thrift store. Another shared stories of her aunt and uncle who were weavers. My students were very knowledgeable and, as usual, I learned as much from them as they did from me.

The Whatcom group was a tight-knit community of weavers, too. Many have known each other for years and they constantly share ideas and encouragement. The Jansen Art Center provides studio space for their collection of looms as well as library and meeting space. The staff at the Jansen Center was very welcoming and the cafe served some dynamite lunches–plus afternoon lattes to keep us all going.

I hope I get a chance to visit the area again. I wish everyone had such a nurturing weaving community. We all need connections and we benefit from seeing each others work. I’ll leave with a couple of photos from the ferry to Whidbey Island from Mukilteo.

On January 10-12, 2020 I taught an overshot workshop at Yadkin Valley Fiber Center to a delightful group of students. They came prepared with looms warped and questions ready. We had a full two and a half days of weaving, talking, learning and sharing. Students started with the same threading pattern and worked their way through various treadling variations. Each made their own decisions regarding color and thickness of the weft. Along the way we talked about the theory of overshot, how to design overshot and what life must have been like for the weavers who came before us.

For new or non-weavers, overshot is type of weave structure that creates blocks of pattern when some threads skip, or shoot, over the cloth. The structure was used in making coverlets. Old time weavers used cotton (or linen) thread crossed with wool thread. The resulting cloth was lovely and warm. We used cotton thread and some wool thread in class.

One student had mistakenly used warp twice as thick as what was called for so her samples were extra large.

It is always fun to see how each student’s work is unique, even though all start with the same instructions. That is what makes handwoven creations works of art. You can see it in the photos below.

We didn’t just weave traditional overshot. We added some other structures that are possible to weave on an overshot threading, like the flame point variation shown in the above pictures. We also wove honeycomb.

The students labeled their work as they went. When they went home, they cut the sampler off the loom and washed it. Everything changes with washing. The warp and weft threads relax and settle around each other. Some cloth that looks two dimensional on the loom becomes more three dimensional after it is washed and dried.

I’m proud of the work everyone put into the class. Everybody helped each other, sharing tips, supplies and extra yarn. Thanks to Leslie at the fiber center for wonderful hospitality in her new surroundings. It was a great place to meet. I came home from the class inspired by my students and ready to try some new ideas of my own.

On the weekend of Sept. 21 and 22 I’ll teach a workshop for Central Virginia Fiberarts Guild in Albemarle County. We’ll explore huck lace, spot huck and many variations of the huck structure. We’ll also try some non-huck patterns you can weave using the same threading. It’s always fun to weave with others. Weavers spend a lot of time with just themselves and their looms. When we weave with a group, we bounce ideas off of each other, coming up with lots of “what-if” ideas. It is always inspiring. Here is a sampling of just a few weaves we’ll explore.

This weekend, June 28-30, I taught at the MAFA 2019 Conference at Millersville University in Millersville, Pennsylvania. MAFA is the MidAtlantic Fiber Association and they put on a conference every other year. This year I taught Weaving 101 to motivated group of 8 students. They started on Friday morning with some yarn and a warping board, and by Sunday noon they had woven off a sampler of plain weave, twill weave and even double weave–a pretty advanced concept. It was wonderful to observe their camaraderie as they shared with each other. There were often exclamations of excitement as they understood a new technique or bit of information.

I tell my students that learning to weave isn’t just one skill, but a series of skills they have to master. Each one takes patience to learn. They start with learning to measure the warp on a warping board. Next they have to move the warp to the loom. At the loom, they have to wind the warp on the back beam. Then they have to thread the warp, and put the warp ends through what’s called a reed. Next they tie the warp on to the cloth beam in front of the loom. Finally they tie up the treadles and begin to weave. The whole process of getting the loom ready to weave can take as long as actually weaving the fabric. My students this weekend finished the setting up of the loom in record time so they were able to explore plenty of weave structures in their sample. On top of being quick they had great attitudes, making it a pleasurable class. Having Leslie Fesperman, of Yadkin Valley Fiber Center, as my assistant was a great help.

There are now some new weavers in the world. They have the knowledge and enthusiasm to go far. I hope at the next MAFA conference I’ll see them with projects they have woven at home with their newfound skills.

I have been playing around lately with double weave-pick up. I taught a class in West Virginia on double-weave and had enough of my sampler warp left to practice the technique. It’s pretty time consuming and you have to really pay attention, much more so than when weaving scarves. I found the meditative quality pleasant.
In double weave the loom is set up so that two layers of cloth are woven simultaneously, one above the other. If you want, you can form an image by hand-manipulating how the two layers of cloth interact. This is called double weave pick-up. When you weave double weave pick-up, you use a stick to pick up some threads from the bottom layer and weave them into the top layer, then pick up other threads to weave top layer threads into the bottom layer. Below you can see part of my process and a couple of finished pieces.
I used 10/2 cotton threaded at 32 ends per inch (16 ends per inch in each layer). The colors were deep purple and red-orange. When the colors are next to each other they read as orange and blue. As a side note, I wove some of these pieces while UVA was winning the NCAA basketball championship. Their colors are orange and blue–go ‘Hoo’s! 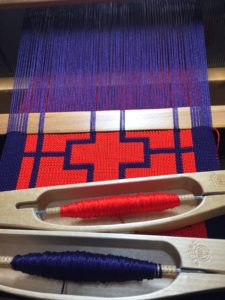 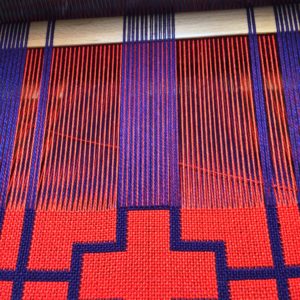 Picking up the orange threads 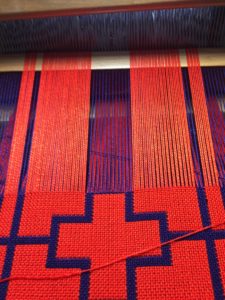 Selected orange threads stay above while half of the purple threads are raised. 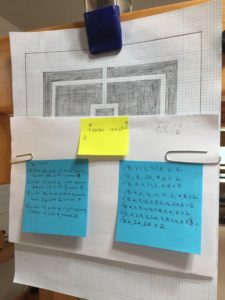 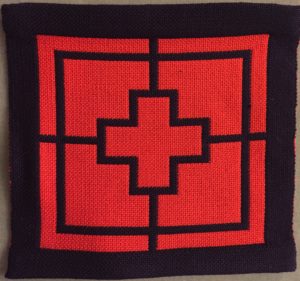 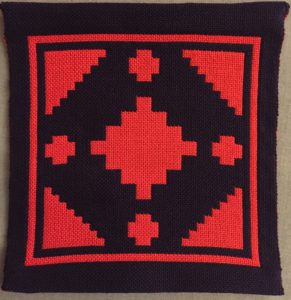